We almost didn’t hire any help for lambing this spring. Anyone who is familiar with what lamb prices have been over the last year and a half will know why. We were fully prepared to make the big push through lambing on our own, but were a little worried about whether we could keep up with everything. Thankfully we didn’t have to.

It was sometime toward the tail end of our fall lambing last year when Alyssa invited some new friends from church out to see our lambs. The Pearson family came with all the enthusiasm we’ve come to expect from them. Of course any family with 11 children is bound to bring excitement just about anywhere they go! Towards the end of the farm visit I offered to show the kids how we shear our sheep. They watched with interest, and when I asked if anyone wanted to try their hand at running the clippers I was surprised by the number of takers. I’ve come to realize that this is the way the Pearson family operates, enthusiasm to learn something new and tackle challenges with piles of energy and a big smile.
So when I asked the two oldest Pearson boys, Connor and Brayden (14 and 13) if they could come help out for shearing this year, I was very happy when they said yes.

Shearing was more fun than usual with Connor and Brayden here. Connor must have exhausted every muscle in his body learning to shear, determined to get done as many as he could. Brayden picked up the duties of managing the shearing floor and wool. Both of them worked hard and had a great attitude the whole time. I was excited when they asked if we needed any help during our upcoming lambing. Even though we hadn’t planned on hiring anyone, I knew this was a great opportunity and wanted to make it work.

The boys came every Friday through the busiest portion of lambing. They took responsibility for almost all of the daily feedings and duties that take up so much time every day. This gave me valuable hours to catch up on the many other jobs that are pressing during lambing like tagging and putting in new lambs.

By the second week here, the boys already had the routine down and before I knew it, they would be through the daily chores and asking what they could take care of next. We got tons accomplished in the few days that they were here, and it always seemed like they were finished a job almost as soon as I gave it to them. 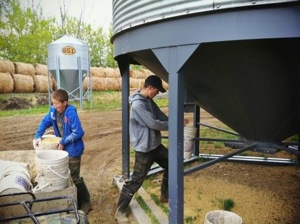 So, as we wrap up lambing for this spring, we’re going to miss Connor and Brayden working around here. In thinking about our experience with them over the last five weeks I realized how unusual it is these days to come across two young guys with so much character. They always showed a great work ethic for any job I assigned, and took initiative to take care of something that needed to be done even if I hadn’t noticed it. They were able to solve problems on their own, but were honest and forthcoming when things didn’t go the way they planned, like a quad stuck in the mud :). And something that I realized was really unusual was the respect they addressed me with (Mr. Driedger).

At the ages of 13 and 14, I realize that our world considers Connor and Brayden immature and fully expects them to act as such. It seems like the culture of our time expects young people to spend most of their time watching TV and playing video games, rebelling against authority and getting themselves into trouble. But, as I watched Connor and Brayden working, I realized that these boys were acting as was the norm for those their age in past centuries. I realized that they were acting as much more than what our world would expect from them. They were stepping up to their God given role in life – to be a responsible and creative ruler of the earth, creating something valuable with the work of their hands. And this is the dividing line between the boys and the men. Those who take that responsibility by the horns and own it, and those who refuse to. That’s why Connor and Brayden are, at least in my books, men. We’ll miss them around here.

I sure hope they can come back next year!