Two days ago(thursday) was a busy day for us. It seems like time is flying and the pastures are getting deeper and deeper. Meanwhile, the sheep have been penned up inside, many of them finishing up lambing, but about 150 who could have probably gone out quite a while ago. The only reason they weren’t out on that beautiful grass was the state of our fences. It seems like there are holes in the wire all over the place. So, I finally put some of the fencing on the top of my list. 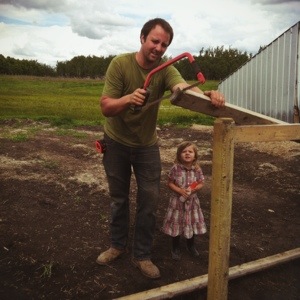 One of the major repairs was the fenceline that burned in the fire we had this spring. The kids came out to help haul boards around, hammer some nails, saw boards, and haul away the scrap. Everyone worked hard and got the job, mostly finished up. At least enough to hold ewes in.

The other thing that needed to be done was to run a temporary stretch of fence across between our house and the barn yard. I have always felt that there is an awful lot of grass going to waste around our barns and sheds, and this year I wanted to let the sheep graze it rather than let it grow long or try to keep up with weed whacking it all. 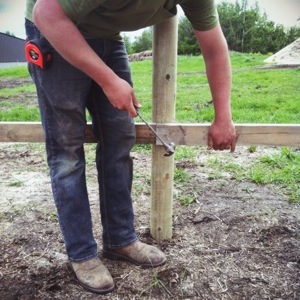 Well, we worked all afternoon and after supper, when everyone was put to bed, I went back out to finish up until about 10pm.

Once the fences were secure, I opened the pens for about 150 ewes, finished up a few chores and went to bed. The plan was to keep the barn doors open and allow the ewes access to it for protection from coyotes, but free access to go out and graze when they wanted to. The ewes stayed inside that night as I expected, but when I looked out the window friday morning I was surprised not to see any sheep out grazing all of that green grass. 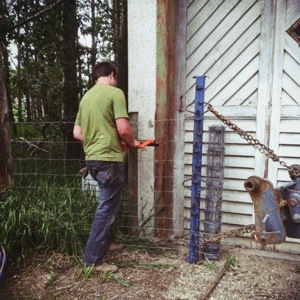 For a minute I was worried that they had escaped through some unseen hole and taken off into the hay field. But, when I got out to the barn, there they were milling up and down the alley scrounging for left over hay. I couldn’t understand what they were up to. They had no lambs in the barn or any other reason to want to be in there that I could tell. It just seemed like they preferred the dusty barn over the fresh air and grass outside. I chased them out a couple times throughout the day, and every time they circled around and came back in. The only logical reason I could come up with for this strange behaviour was that the ewes were content being close to the majority of the flock who was still penned up inside, and possibly that they were somewhat attached to the dry dusty hay they had been fed all winter. 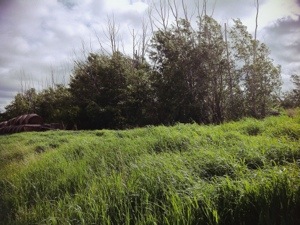 I finally gave up on them and resolved to wait for them to make up their own minds. Well, they spent almost the entire day inside, looking for bits of dusty hay. Finally friday evening they began to come out of the barn in small groups. It seemed like they were finally beginning to warm up to the idea of fresh air and green grass. Today (Saturday) they are still spending most of their time in the barn, but more and more they are coming outside.

I spent all that time fencing thinking our ewes would come rushing out into the sunshine to devour that lush green grass, but no, they decided to stay exactly where they were in a dim smelly barn eating dusty hay.

Just when I think I am beginning to understand sheep behaviour they always find some way to baffle me. In the end I am reminded that people aren’t so different from sheep after all.